Tamara and David became FOLK2FOLK Investors in the summer of 2019 to supplement their monthly income from their newly refurbished guest house, Kinbrae House, in Cornwall.

Having moved from Jersey to Falmouth with the dream of opening their own holiday let business, they were originally introduced to FOLK2FOLK as Borrowers by their bank. With the help of a FOLK2FOLK loan, Tamara and David were able to transformed a beautiful Edwardian property into luxury 5-star self-catering apartments.  Now running a successful business, and having paid back their loan, Tamara and David found themselves in a position to make investments. Their first-hand experience of how FOLK2FOLK assess business Borrowers and how its Investors make a very real and important difference to local businesses by lending funds, meant they had confidence in investing via the peer to peer lending platform.

“We are delighted to be able to offer our support to other businesses who need private funding in the same way that we did.”

Three years ago, Tamara, an interior designer, and her husband David, a former swimming pool designer, decided to up sticks and move from their home in Jersey to the seaside town of Falmouth in Cornwall. They fell in love with an Edwardian property, situated a stone’s throw away from beautiful Gyllyngvase Beach, which had become rundown and required a complete upgrade to transform into the luxury holiday destination it is now. Although having skills and experience fit for the job, they needed financial help to achieve their dream.

Tamara and David initially set their sights on using a high street bank to provide them with a mortgage on the property, but unfortunately, as they had not lived in the UK for very long, none of the banks they spoke to would lend to them. After beginning to believe their dream would never become a reality, they were heartened when a high street bank advised them to give FOLK2FOLK a call.

After contacting FOLK2FOLK, a meeting was set up at Kinbrae House to discuss David and Tamara’s business idea and after learning about their plans, FOLK2FOLK were thrilled to be able to help.

Tamara and David were passionate about keeping the work local, ensuring they used local tradesmen and supplies throughout the renovation of Kinbrae House.

“We were over the moon that we were able to save a lovely Edwardian property in Falmouth and to breathe a new life into it. We have used local trades people and suppliers for most of the work that we have carried out.”

Since opening Kinbrae house, Tamara and David are now in a position where they can invest some of their money and when thinking of where to invest, FOLK2FOLK was a natural solution having seen the positive and very real impact investing via FOLK2FOLK can make to people just like them.

When speaking with Tamara on why they chose to invest via FOLK2FOLK, she said:

“Very interesting projects are offered to Investors; you can choose which ones to invest in and the FOLK2FOLK team are very lovely to deal with.”

Do you have a project we could help fund? Or are you interested in supplementing your monthly income by becoming a Investor? Give us a call on 0333 455 1902 or email enquiries@folk2folk.com.

Capital at risk. No FSCS.

A breath-taking sight awaits as you emerge round the bend leading down to the North Devon coastal village of Woolacombe.  Bright, shimmering sea striped with frothy waves and edged by an inviting sandy three mile beach creates a view not easily forgotten and amply justifies Woolacombe’s inclusion in the UK’s top 10 beaches.*

In 2008, after many years of idyllic family summers spent on this unspoilt and naturally beautiful stretch of coast, Robert and Sheila Sawyer discovered a local hotel for sale and were excited by its possibilities. The Narracott Grand Hotel had been an iconic destination for surfers and families in the 1960s and 70s but had been in terminal decline for years. Instantly recognising its potential to create a new destination for a UK holiday, Robert and Sheila joined with five other directors to form Blast Properties Ltd and purchased the hotel.

However, the financial crisis put their ambitions on hold until the economy strengthened in 2016. They also saw opportunity presented by Brexit, anticipating that British buyers would take more staycations and make savvy holiday home investments.

Now complete, the property development is known as Byron and offers 57 open market residential apartments. The level of luxury on offer aims to alter the perception of Woolacombe and challenge some of the more glamorous beach resorts further down the coast.  And, it appears to be succeeding; a recent article in the Telegraph featuring Byron, referred to Woolacombe as “The old-fashioned Devon seaside spot that could soon rival Rock”.

Byron is one of the largest investments in any North Devon coastal community and an example of one of FOLK2FOLK’s largest single peer to peer loan investments to date.

In 2019, with the majority of the build complete and almost half the apartments sold, the directors of Blast Properties had met the conditions of their original funders and began looking to consolidate their loans and refinance on better terms for the sales phase.  FOLK2FOLK was chosen after Blast Properties approached a number of lenders via their broker.

“The offers that were eventually tabled were in no way comparable to FOLK2FOLK’s offer,” explained Robert, “An additional benefit was a shared sense of purpose to regenerate economic activity in a small community in North Devon.”

Ranging from one to four bedrooms, Byron’s apartments have exclusive use of the development’s luxurious facilities which include a wellness spa, gym, indoor pool, sauna, games room and parking. Brundles, a new restaurant on the site is run by Devon-born Graham Brundle, the former personal chef to Richard Branson on the entrepreneur’s Necker Island resort in the British Virgin Islands. Brundles is open to the public but offers exclusive benefits to owners and their holiday rental guests. It’s easy to see why Robert says “owning an apartment at Byron is like having a hotel in your home”.

Robert and Sheila explain that owning a holiday home at Byron provides a great location for holidays with friends and family while also offering owners a lucrative source of additional income.  The apartments have been designed with this in mind and are unrestricted by any holiday occupation clause.  In addition, Byron’s letting service offers a hands-off service that enables owners to enjoy rental profit without the hassle of dealing with an off-site agency. 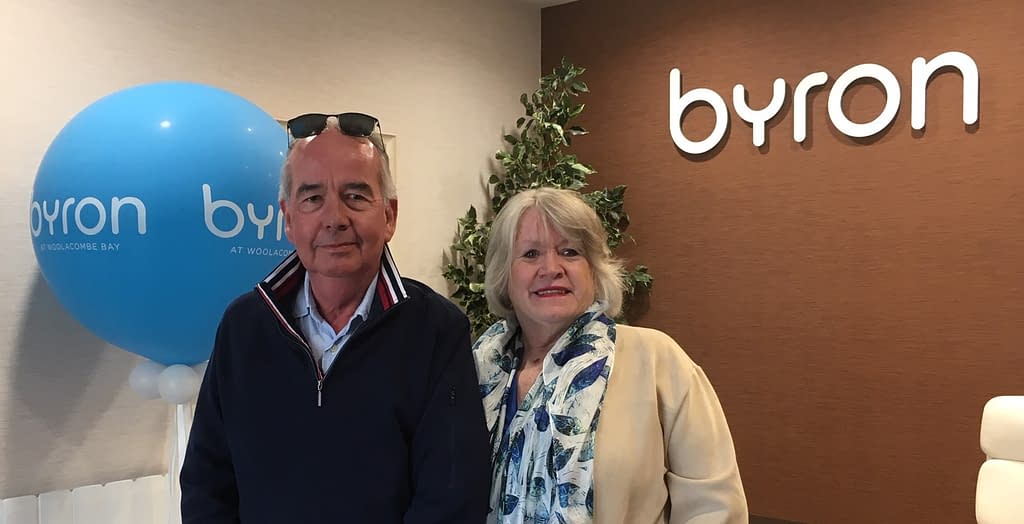 Robert explains there are also tax benefits for this type of property investment: “What many people don’t realise is that recent tax changes to buy to let taxation are making furnished holiday rental property more profitable than buy to let property.

“Apartments at Byron can be classified as a Furnished Holiday Let (FHL) which brings benefits of capital allowances and other tax benefits compared to Buy to Let. This is because Furnished Holiday Letting is treated as a business, whereas Buy to Let is treated as an investment in property.  Based on the purchase price alone FHL properties at Byron offer tax free profits for up to five years.”
– Robert Sawyer, director Blast Properties Ltd

By developing the former Narracott Grand Hotel which had been in decline for years, Byron has made a significant economic impact to the local area.

“Approximately 46 full time roles have been created at Brundles Bar and Restaurant and five new jobs at Byron for staff to provide services to owners and their guests. We estimate the annual gross value added to the Northern Devon economy is approximately £1.48m per year. “
– Robert Sawyer, director Blast Properties Ltd

In addition, local tradesmen and businesses were used in the build and local suppliers are used by Brundles restaurant, except for very technical consultants who had to be imported from elsewhere in the South West. The attraction of the development has the potential to draw an increased number of diners, visitors and tourists to Woolacombe and its local businesses.

For more information about borrowing or lending via FOLK2FOLK
Visit: www.folk2folk.com  Call: 0333 455 1902

Pauline and Andy have a small holding in Herefordshire. Inching closer to retirement, they made the bold decision to try their hand at property development, something neither had done before, to help build up their pension pot.

Their grand plan was to build four new four-bedroom properties all with high spec eco-credentials including solar panels, charging points for electric cars, underfloor heating, water storage and bio mass septic tanks.  To counteract their lack of experience in property development, they secured a multi award-winning architect to help manage the project and bring their design dreams into fruition.

After receiving planning permission, Pauline and Andy approached their bank of 18 years for a business loan but were astonished when they were turned away: “We had some savings to invest in our project, land as security for a loan, and planning permission for the build but the bank was nervous of development. We couldn’t see a way forward after being turned down by other banks, then one referred us to FOLK2FOLK and our luck changed.”

FOLK2FOLK took an holistic and common-sense approach to Pauline and Andy and the project. “FOLK2FOLK’s attitude was different from the start. We felt like they wanted to help and were friendly and helpful throughout the process.”

Pauline and Andy have employed fifteen local tradespeople to work on their current development and build project, and having been bitten by the property bug are already planning future projects.

“We’re so grateful to FOLK2FOLK for giving us the chance to do this. Not only is it great to obtain the finance we need for our project, but it feels brilliant to be able to create jobs for local people and it’s also nice to know we’re helping FOLK2FOLK’s investors grow their retirement pots – just like we’re growing ours.”

Important Information: Your capital is at risk and is not protected under the Financial Services Compensation Scheme. FOLK2FOLK Limited is authorised and regulated by the Financial Conduct Authority (FRN 720867). Company Registration No. 08178576. Our registered office address is NUMBER ONE Business Centre, Western Road, Launceston, Cornwall, PL15 7FJ.

Your property against which the loan is secured could be at risk if you don’t meet payments. FOLK2FOLK Limited is authorised and regulated by the Financial Conduct Authority (FRN 720867). Company Registration No. 08178576. Our registered office address is NUMBER ONE Business Centre, Western Road, Launceston, Cornwall, PL15 7FJ.